How to Watch RTE in the UK: the easy way to watch RTÉ on your Smartphone, Computer, TV or Tablet

The BBC isn’t the only great streaming service available which broadcasts in English.  Indeed there’s lots of different one’s all over the world, including just across the water in the republic of Ireland.  Even if you have no direct connection to Ireland there’s still lots of great shows and movies from all over the world.   Indeed sometimes RTE gets the licenses for some blockbusters surprisingly quickly.  Here’s how to watch RTE in the UK or anywhere else in the world.

What is RTE Player ?

RTÉ Player is a streaming service like the BBC iPlayer that allows you to watch the RTÉ TV channels using the internet. It’s available for free on PC, Mac, iPad, iPhone, Android and other devices. It’s basically the online web player for the biggest Irish TV station – RTÉ. RTÉ has been around for a long time now and offers some of the best TV coverage in the republic of Ireland. The channel covers shows, movies, documentaries and sports all streamed online and through traditional broadcasting methods. 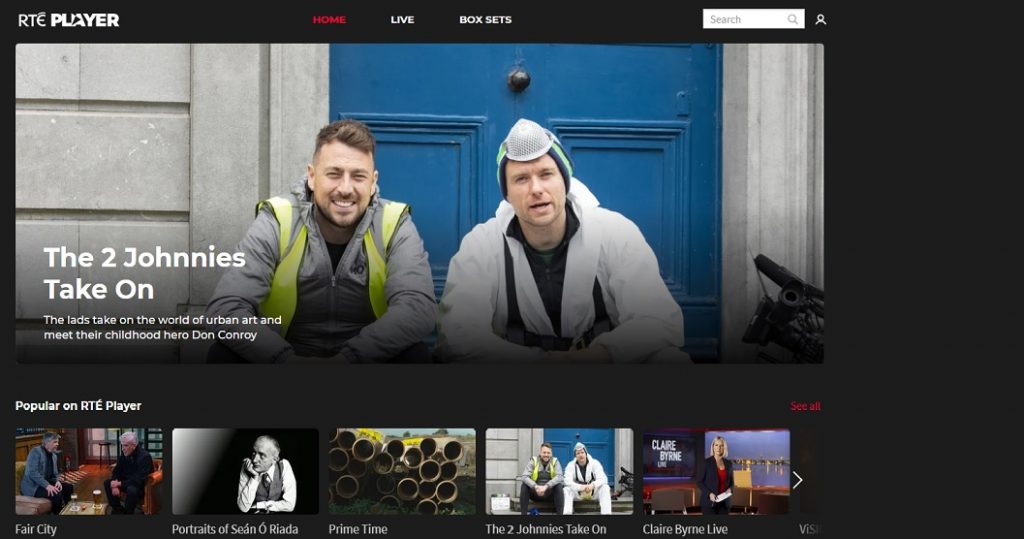 It’s generally not accessible outside the Republic of Ireland with one notable exception. If you’re based in Northern Ireland you can usually access all the Republic of Ireland TV channels including TG4, RTE One and RTE Two. The methods vary depending on your location but they are all available through aerial, satellite or cable subscriptions without restrictions. Depending on your location in Northern Ireland you can also access these services using Freeview too.

Can I Watch RTE outside Ireland?

Apart from Northern Ireland, most of the RTE channels and programmes are blocked. Currently in 2021 the exception to this is certain news broadcasts which are available from anywhere. If you just want the latest news from Ireland then this may be enough for you, check the site and see how much is accessible (it does change a little over time).  Usually though the situation is much like watching the BBC from Ireland.

Unfortunately though the majority of programmes streamed on RTE Player won’t work if you’re physically located outside the Republic of Ireland. It’s due to a technology called geo-targeting or blocking which restricts access based on where you’re connecting from. The RTE site looks up your IP address when you connect in order to determine your physical location. If that’s outside Ireland then you’ll be blocked from the majority of the site’s content.  Currently does use any other techniques such as prompting for a postcode like the BBC.

It’s nothing special, virtually every large TV or media site on the web does exactly the same. Indeed being blocked from BBC iPlayer while in the Republic of Ireland works in exactly the same way in reverse. The practice of filtering and blocking people is becoming increasingly common in the online world for a variety of reasons. Much though is due to copyright restrictions and profit maximisation though.

There is a method to defeat the geo-targeting efforts of RTE Player though and allow you to watch from anywhere in the world. You need something called a VPN to be able to hide your real location and bypass the blocks!

What is a VPN

A VPN is a virtual private network, which can be used to change your IP address and location. It allows you to access content that may not otherwise be accessible or safe to view in certain countries or regions. A VPN will allow you to remain anonymous online while protecting your privacy. It’s primary use has always been to protect your data whichever networks you are using. A VPN encrypts all your data automatically meaning that it is unreadable even if using an insecure network like the internet.

However in later years there has been a huge growth in the use of VPNs not specifically linked to security. Basically VPNs are now used by millions of of us all over the world to bypass the geo-blocks used by many of the world’s most popular websites. When you connect to a VPN, any website you visit will see the location of the VPN server not your real one. This means if you connect to a UK based VPN server you’ll appear to be located in the UK. If you connect to a US server then you’ll be assumed to be a US resident.

What’s more if you choose an Irish VPN server then suddenly RTE Player will work perfectly wherever you are . The VPN services have capitalised on this market and most of the major services like NordVPN allow hundreds of different locations under their basic subscriptions. You just click on the location you need and all the filters and blocks will be removed when you access.

How Can you Watch RTE Player in the UK with a VPN?

To watch RTE Player in the UK, you have to first pick a VPN provider that supports this country. You can then connect with your desired device and enjoy all of the benefits that come along with using a VPN service. Using this service will help you beat geo-restrictions on TV shows by accessing content from anywhere in Europe without having to worry about any restrictions or limitations put upon it.

Although you’re real IP address/location won’t change when using a VPN – it will appear to ! When connected to a VPN server, only the location of the server is visible. So if you connect to a VPN based in Dublin for example then all the Irish only TV channels like RTE Player will work perfectly. It won’t matter if you’re in the US, UK or across the other side of the planet, your VPN will make it look like you’re in the Republic of Ireland.

Indeed if you have a VPN with servers in the Republic of Ireland (usually Dublin!) then that’s all you need t enjoy RTE anywhere. It makes no difference if you’re in the UK or anywhere else as your server will hide your real location. Remember though it is another additional step in your network journey so the connection and server needs to be fast other wise it could be very slow.

This is particularly important if your main internet connection is slow as any reduction in speed could be a factor. Routing your connection from somewhere like Australia via a VPN serve in Dublin and then onto the RTE site can cause some lag. Mostly though decent VPN services like NordVPN will have very little impact on your internet connection.

Remember though some of the RTE content is available from anywhere particularly news programmes. It’s worth checking before spending your hard earned cash on a VPN services.

What are Some of the top VPN Choices for watching RTE?

It sounds like any VPN service with servers in the Republic of Ireland would work for this. Although this certainly used to be the case, unfortunately it isn’t in 2021. Like many of the world’s most popular media sites – RTE attempts to block access from any VPN or proxy servers it can locate. This means that many VPN services won’t work with RTE anymore as their IP addresses can be detected.

How does this work ? Well there’s a few methods –

RTE Blocks access to IP address with too many connections

This is the main method used to detect VPN addresses. Although RTE cannot detect a VPN directly if a thousand people are all streaming content from a single Irish IP address then it’s likely that it’s from a VPN server. Most people won’t be on the same IP addresses and large numbers of concurrent connections are a huge signal of a VPN being used. It means that a single Irish IP address shared between all the users won’t be enough- RTE is actually quite aggressive in blocking these.

any VPN service which works with RTE effectively must keep a low profile. Advertising access or using RTE logos is an easy way to get blocked or blacklisted, don’t use these. You can ask support or email but don’t expect to see RTE access guides openly displayed on the best VPN services.

There are a few free VPNs and proxies available online with Irish servers. However none of them really work for accessing RTE anymore. They’re either overloaded and slow and get blocked because of this. Also many of these free servers are not set up securely and leak important security and configuration information to the servers they connect to. This makes them much easier to detect and block.

Read on to see our two main recommendations for RTE access.

Over the years many VPNs have been blocked either entirely or temporarily from accessing RTE Player from outside the Republic of Ireland. They seem to vary how aggressive the geo-blocks are occasionally and sometimes it’s almost impossible to access the site using any VPN. The main issue seems to be the number of connections as noted above. However RTE have to be careful about how low they set the number of connections because many people use corporate proxies and VPNs from the workplace too.

The two most important factors of ensuring the best chance of uninterrupted access are speed and number of Irish servers available. Problems with either of these can lead to issues streaming from the RTE site.

We’ve found the following two VPN services to be consistently the best for RTE Player access.

One of the oldest commercial VPNs can look kind of old fashioned when you look at their website. There’s certainly no mention of watching TV or bypassing entertainment blocks anywhere. This is partly due to the website never having been updated but also a deliberate low key tactic. There was a short period when none of the servers worked with RTE but this was shared across the entire industry. The main drawback is that Identity Cloaker is primarily a PC application, you can install it on other devices but you have to configure it manually.

Their 10 day trial is perfect if you only want access for a short period.

Probably the biggest VPN company in the world with literally thousands of servers all over the world including the Republic of Ireland. The servers are fast, secure and the software is incredibly simple to use. You basically just click on a map and you connect through to a VPN server in that country. as long as you know where Ireland is on a map it’s very straight forward!

NordVPN also has apps and software for other devices like Smartphones and tablets making it especially easy to use on these devices. You can use your NordVPN subscription on up to six different devices concurrently. It’s very reasonably priced if you go for the longer subscriptions however the shortest deals are quite expensive if you only want the VPN for a few weeks. Having said that it’s only a few bucks for a months subscription so still not exactly costly.

Their price changes a lot – the latest deals can be found here.