Accessing the BBC and the other UK catch up services has become slightly more challenging in later years.  It’s not particularly the technology which has changed but rather the increasing effort that these streaming services are using in blocking multiple connections.   The only real way to combat this is by maintaining a low user ratio on the servers,  switching IP addresses and of course having lots of server locations.  It’s time consuming and expensive which is why many of the cut price VPNs simply don’t work anymore especially if you want to watch BBC iPlayer in Ireland or anywhere outside the UK.

I’ve just checked performance of streaming the BBC against some of the other famous VPNs.  It may not have the fanciest website but the Identity Cloaker servers are easily the fastest for accessing UK sites. What’s more they work very hard to stay off their IP block list, so you won’t get constant error messages.  If you want a VPN specifically for watching the BBC anywhere in the world on a computer then this one is hard to beat.  So many of the VPNs are so overloaded that their servers are blocked all the time.

Try Their Ten Day trial to Watch the BBC iPlayer in Ireland today.

It seems crazy, that a few miles over from the British mainland you can’t access watch the BBC online or indeed anywhere outside the UK.  That’s right, despite being linked in so many ways,  just try to watch – BBC iPlayer Ireland and you’ll get a little message like this one. 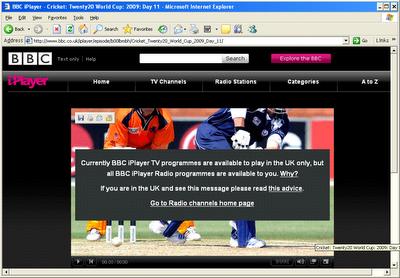 What actually happens is that when you connect, the BBC web site looks up the IP address that you are connecting with. So in this case I happen to be in Dublin so the IP address assigned to me is registered in Ireland.  Using that information means that the BBC will not display any of the content on iPlayer abroad and also blocks the live BBC stream as well.  In fact the only part of the site you can see is the Radio section which is nearly all accessible, apart from the local radio stations for some reason.

It doesn’t matter who you are or even if you have a UK TV license at home in your house, the decision is based purely on your location.  This is not something you can directly control, although millions of people have learned that they can  hide their location and hence discovered how to access BBC iplayer outside UK boundaries.

So is there any option for BBC iPlayer in Ireland?

What can you do to access BBC iPlayer from outside the UK mainland?  Fortunately there are options for anyone outside the UK and here’s currently the most effective one  –

How to Watch BBC iPlayer in Ireland

This video demonstrates accessing the BBC from Ireland, the process is exactly the same for any other channel in the UK too such as ITV, Channel 4 and 5 for example. You are simply using a VPN server to hide your real IP address and supply the one required – i.e. a British address.     So when you visit the BBC website instead of looking up your real IP address, it will only see the address of the server you are connected to.  As long as this server is based in the United Kingdom then you will have no problem at all with the Beebs not working!

It works seamlessly and after the initial check you can even disconnect the proxy server if you require, although if you want to watch another show then you’ll need to reconnect the proxy again. The program I use is called Identity Cloaker and you can grab the trial here for a few Euros and try it out now.   The rule is simple just ensure that you pick the right country before you connect, so any UK server will allow you to watch BBC on demand in Ireland or anywhere in the world.

The BBC iPlayer is a wonderful resource with one of the best user experience of any web site anywhere. Indeed many anglophiles and expats rarely watch TV channels anywhere else.  You can watch all the main channels live 24/7 to keep up with the news or programmes like Match of the Day.  The archive also contains thousands of shows including most of these programmes for a year after broadcast.  It’s also stocked up with loads of older shows from the BBC’s history although some of this has now been moved to Britbox which you can also access with a VPN but requires a subscription fee.  Yet  there’s lots of programmes like Blue Planet and Doctor Who to enjoy entirely free of charge.  Although unfortunately they’ve just removed my favorite Fawlty Towers but it should be back on soon.

It doesn’t stop there though, you can use any of the other servers located in other countries as well.  So for example if you wanted to watch something on US TV like Hulu or NBC then simply select a server based in the USA instead.   It also works with subscription channels too, although you will need a valid account with them,  Many people use the same method to watch Sky Go abroad too when they’re travelling or on holiday.     There are now hundreds of thousands of people who access all UK TV stations every day from Ireland and all over the world – who use this method.

You may have seen reports  about BBC iPlayer VPN connection programs not working on forums and social media.  This refers to a crackdown instigated by the BBC way back in 2017,  it actually resulted in many VPN and proxy services being blocked.  Fortunately the well configured services like Identity Cloaker still work perfectly to watch the BBC iPlayer with any internet connection.  Plus don’t forger all the other video on demand service sites in the UK like ITV Hub, Channel 4 and so on.  It’s been working perfectly with all these for over a decade now.

There are also quite a few other services available, but so many of them are slow, unreliable and expensive.   The Identity Cloaker guys have been round for many years and their software is used by many thousands across the world.  It has a neat little front end, is easy to install and also gives you access to a whole host of other servers in different countries too.

It also can be used on iPads, tablets, Smart Phones and lots of other devices, just check with their support.

You can use it simply as a security product to encrypt your connection wherever you are, or unlock every major media site on the internet by switching your location at will.

Try it, you won’t be disappointed.

You can be watching any the BBC or any UK TV station online in only a few minutes, it’s that easy.