How to Download from BBC iPlayer Outside UK in 2021

The two VPN services mentioned by this article include –

Identity Cloaker – primarily a security service which has worked perfectly to access streaming services like the BBC by the author for many years.  It only has a PC version though, so you have to set it up manually on any other device.

NordVPN is another VPN service which you can use to watch iPlayer abroad.  It’s sometimes slightly slower than Identity Cloaker, but has versions for most clients – including applications for all major mobile phones.  Works well and is very  good value if you subscribe for one of the long term deals, they do offer a money back guarantee if you’re concerned.  You can enable it on any device then you’ll be able to download the BBC iPlayer App outside the UK.

Both of these services will allow you to bypass the geo restrictions and access the BBC, beware as many, many VPNs are virtually completely blocked.   NordVPN is the cheapest but only if you lock into one of the longer subscriptions, it is also easier to use on smart phones and other devices.  Identity Cloaker is by far the most reliable VPN for the BBC as they don’t have anywhere near as many users accessing the BBC and therefore rarely get blocked.

So just to clarify, if you want to access BBC iPlayer then use a UK based VPN. It will enable you to do the following –

How to Download BBC iPlayer Videos Outside the UK

The BBC’s iPlayer has a fantastic feature which sometimes people forget about – i.e. you can download videos from BBC iPlayer onto any device which is able to store them. So for instance you can easily download a load of programmes onto the hard disk of your laptop and watch them whenever you like.   If you follow the below instructions you can use BBC iPlayer to download outside the UK too. Just to clarify once downloaded you can watch these videos anywhere, there’s no UK only restriction after downloading and you don’t even need an internet connection. Perfect for short trips abroad when the hotel Wifi costs a small fortune. 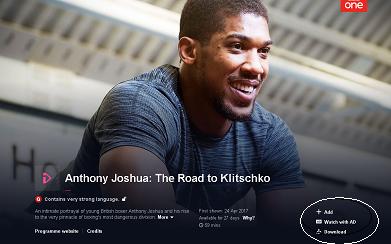 To download a programme to your computer simply visit the BBC iPlayer site and go to the programme you want as normal.  Then instead of streaming the BBC live look for the ‘download’ tab which should be near the bottom.  You’ll be asked if you’ve installed the BBC downloader before with this message – 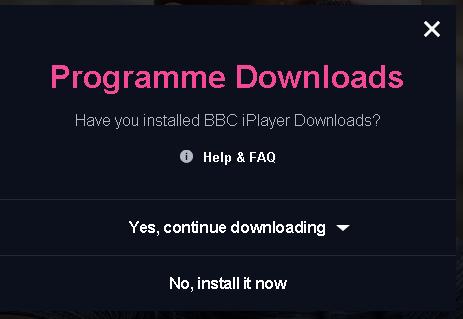 If you’ve never downloaded directly then simply select yes and let it install iPlayer Downloads application – it’s not very big and installs quite quickly.   That’s it really the downloading application will install and you can download as much as you like space permitting – if space/bandwidth are an option then select the SD versions of anything. Your iplayer downloader will work fine on any number of devices.

If you’re abroad, it’s virtually the same but you’ll need to hide your location in order to download anything.

The following video shows how it works

It’s Easy to Use a BBC iPlayer Download Outside UK

So just to summarise:

The files can get quite large so be careful that you’ve got enough storage on your device particularly on Smart Phone, the HD versions are much bigger so stick to SD if space or network speed is an issue. There are apparently some methods to even remove drm from iplayer or even convert BBC iPlayer files from mp4 format although I’m not sure if any of these work that well. Indeed every iPlayer converter I’ve seen has not really been worth the effort.  If you just download them normally then they will eventually expire usually in a couple of weeks, there are apparently some iPlayer ripper programs about but I’m afraid I’ve never tried them.

To be honest, there’s lots of information on the various ways to keep iPlayer files forever but none of them look entirely convincing.  Some of the solution like converting iPlayer to MP3 or other similar options on how to keep BBC iPlayer downloads forever invariably require a huge loss of quality in video and/or sound.  That’s presuming they even work, what’s more the BBC is gradually extending the life of many programmes in the archive.  The recent dramas have expiration dates of 12 months on the BBC iPlayer app so maybe these will keep extending and there will be no real need to convert iPlayer files to an inferior format.

During 2019 there have been some updates to the BBC iPlayer site, in particular you now have to create a user account before using the site.  If you’re outside the UK, don’t worry simply enable your VPN, connect to a UK server and then create the account as normal.  It will ask you for a UK postcode during the registration but as long as you use a valid one it won’t be a problem (just pick any UK postcode).   The account is primarily to keep track of your preferences and viewing habits in a user profile.  However they have also recently extended the expiry time of programmes,  most are now available for a full twelve months on BBC iPlayer.  This increased time also applies to BBC iPlayer downloads abroad, which is great news!

If you leave the VPN connected, then you can watch any of the programmes by streaming them directly to your computer.  Make sure you’re connected to a UK server though, this ensures that you have a UK IP address when connected.    Although the BBC have been blocking some of the less sophisticated VPN services during 2017 there are still a selection that are still working fine.   The one I recommend is called Identity Cloaker which has been working fine with BBC iPlayer for nearly ten years. It is also extremely fast which makes it ideal if you want to download videos from BBC iplayer quickly.