When David Attenborough is involved in a BBC nature programme you know it’s going to be good.  For nearly seventy years he has been presenting and narrating some of the best nature documentaries ever produced.   What’s more the BBC has invested a huge amount in creating these shows over the years which means the expertise is unsurpassed.   All of these advantages and more can be seen in the latest nature blockbuster from the BBC – A Perfect Planet.

The premise is simple really that the Earth is the only planet we’re aware of which is capable of supporting life.    The factors behind this are many but at the heart are the various forces of nature which influence our climate and environment.  This programme tells the story of the various forces of nature and the impact they have on both our environment and the creatures who live in it.  The first episode tells the story of volcanoes, here’s a brief trailer which was released previewing the  new series –

The narration is of course provided by the wonderful David Attenborough, although at 94 years old most of it is from the studio. The theme takes one force of nature each episode to analyse and to learn how it’s shaped our planet and the environment. Of course there are a few mentions about that other force – mankind and how we’ve affected the planet too. Manmade emissions now are 100 times greater than the combination from every volcano on the planet, yet another disturbing statistic.

To be fair the show doesn’t overdo the environmental campaigning too much and is very easy to watch. It’s inevitable that climate change does play a central role in these shows though simply because it’s pivotal to our future.

When these facts are presented by someone like David Attenborough of course they have real impact. When he speaks you have to listen, a man who has a whole lifetime of studying nature and our planet knows the truth. Incidentally if you enjoy these shows there are currently 24 of his programmes on BBC iPlayer at the moment spanning over 50 years. 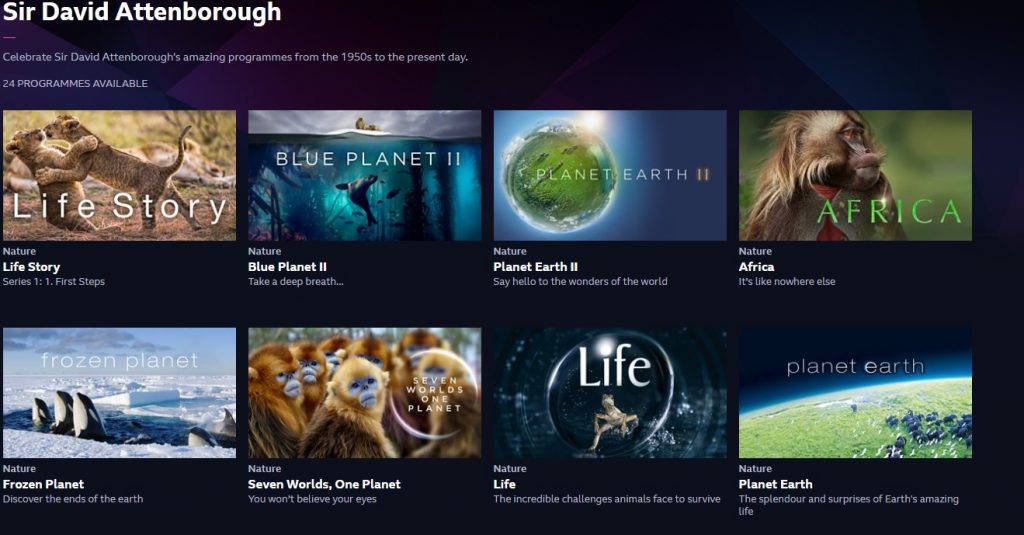 The Perfect Planet is a great balance between education and entertainment, covering the issues without preaching. It’s just an enjoyable watch and the better your TV set the better you’ll like it. Without doubt these shows are the best reason to upgrade your TV sets and enjoy in the highest resolution that’s available to you.
The cinematography in the whole series is incredible and will stun even those familiar with the previous episodes.

Remember all the shows are available on BBC iPlayer for up to twelve months and there’s still lots of previous nature shows like the Blue Planet available to that you can stream or download. There is a problem if you’re outside the United Kingdom as it will normally be blocked however this is easily solved.

Just invest in a subscription from an inexpensive VPN like NordVPN and you can stream for free from their UK servers. If you want something much more reliable albeit at a slightly higher costs then pick one of the more specialized VPN companies like Identity Cloaker. They generally have many more less users trying to connect to the BBC site concurrently so you’ll usually have no problems with access. NordVPN do work but you may have to switch around the different servers occasionally if they’re busy. Both will allow you access to all the UK TV channels including BBC iPlayer from anywhere in the world from Spain to the USA.