Update October 2022 – currently this programme is not available on the BBC iPlayer site.  It’s worth checking periodically and I will update this page if it appears again.  It’s so worth watching.

I think you can always tell when time has been taken to put together a documentary properly, it’s obvious that’s the case with the Last Survivors which aired on the BBC this week (ending 3rd February 2019).  In fact, it has taken well over a year to create this incredibly moving programme which records some of the testimonies of the survivors of the Holocaust.

These are probably some of the last first-hand accounts that we’ll get from people who have endured the Nazi death camps.   Thousands did escape and survive yet time is slowly reducing their numbers to a few hundred.   Obviously, their numbers will reduce greatly now as even the young children of the camps are now well into their 80’s.

Many of the survivors had not previously spoken about their experiences and you could see their pain even now.  Every one of them had battled through life and managed in their own particular way.

One of the most moving was of Manfred Goldberg who lost his little brother in one other labour camps. He came back from his stint of slave labour one day and he was simply gone, completely without trace.  Manfred never found out what happened to him yet was well aware that it was quite routine for the SS to simply round up Jews including 9-year-old and just shoot them in the nearby forest. 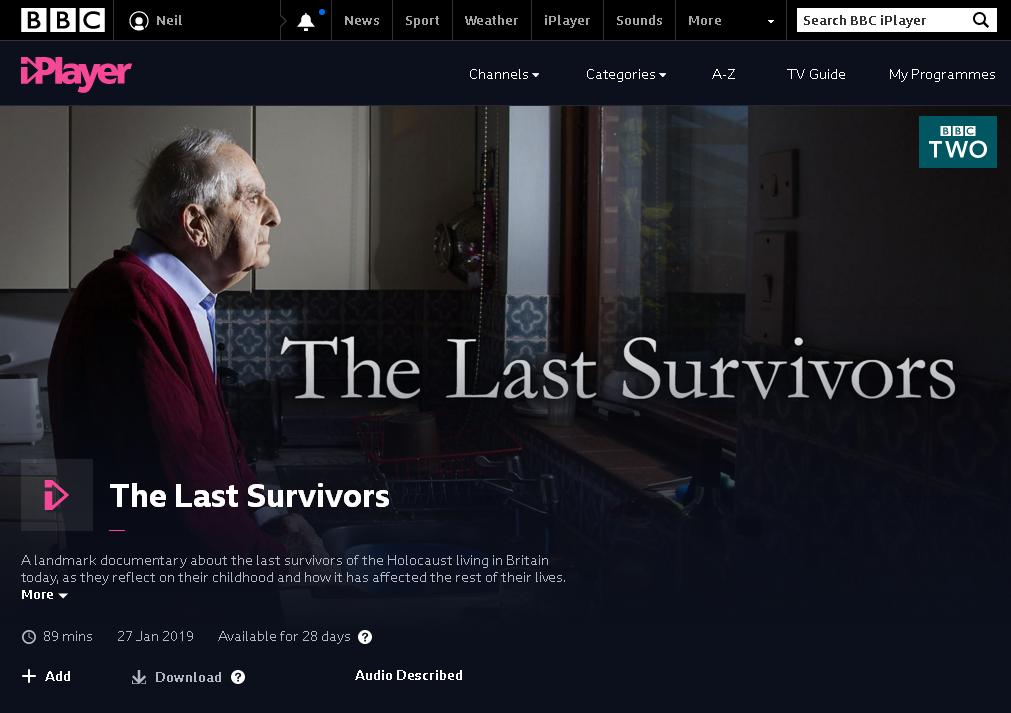 The basis of the documentary was of course the testimonies of the survivors but there also was some other stories of their current lives.

One lady was named Anita Lasker-Wallfisch, a wonderful, formidable lady who seemed to spend a lot of time smoking.   She was being prepared for the gas chambers in Auschwitz when it was discovered that she could play the cello.  Her life was spared simply because the women inmates orchestra needed a Cellist.  A story that perhaps signifies how people survived usually a matter of complete luck compared to those who died.  As one survivor pointed out you needed luck to survive but even with luck you could still die.

Anita stood up in front of the German Parliament and made a speech and imploring that this should never, ever be allowed to happen again.

It’s a wonderful documentary and words written down simply can’t do it justice.  It’s moving and sad and makes your heart feel so heavy, yet I think everyone should watch it.

It was originally available on the BBC iPlayer until the end of February 2019.  However, it does reappear quite often, it was on BBC 4 at the beginning of 2022 so it’s worth checking out periodically.  Here’s the link to the show, but of course if you’re not in the UK then you’ll need to hide your location using something like Identity Cloaker before you are able to watch it online.  Many people use it to watch BBC iPlayer and ITV Hub in places like Spain where it’s not normally available.

Link to the Programmes Home Page – this is the easiest way to see if it’s currently available.