Many media companies have tried this, but so far only one has looked like succeeding – the Netflix VPN block is real and causing havoc with the millions of Netflix viewers around the world.

The story so far – Netflix unable to create a truly global media streaming service has settled for creating a selection of region locked versions of it’s service.  Each regional Netflix service is pretty much unique – the content varying dependent on the rights and licenses it can obtain for that particular country.   It’s a strange situation that we still have to segment the internet based on geographical borders but until the world’s licensing arrangements move into the 21st century we’re probably stuck with this.

So what happens is that you can access your home version of Netflix when in your own country, but if you travel to a country where Netflix isn’t available you’ll  lose access.  If it is available you’ll switch to the regional version of Netflix based on your physical location.   It’s extremely annoying especially if you’re in the middle of a box set and happen to have to travel somewhere.

I saved the last few episodes of ‘Lost’ for a particularly boring business trip but found when I logged in the UK version of Netflix didn’t actually have the series (although it did at one point).    Fortunately there was a solution to this, just as  there is to all these petty region locking media services.  The access is controlled by your IP address, the location of which used to determine which version of the Neflix service you can see (if any).   This means that if you use a VPN then you can control which IP address the service can see, so use a US VPN and Netflix will connect you to the US version of Netflix. 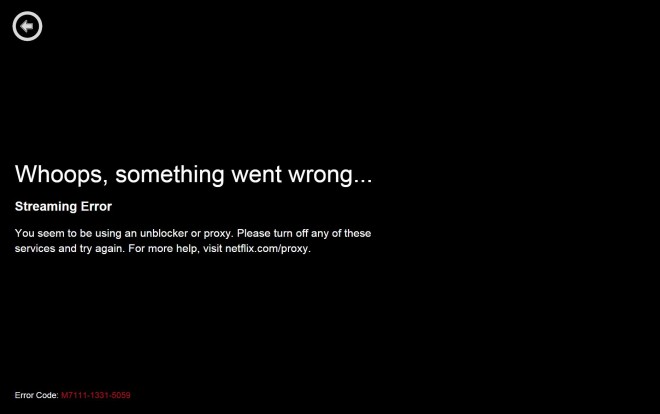 How to Bypass the VPN Netflix Block

Yes the Netflix VPN block is real and works extremely well, pretty much eradicating most of the VPN services from being used in this way.   Of course, this is now big business and most VPN service providers went straight to work to sort out a solution – Identity Cloaker have found and implemented one.

What they discovered was that Netflix was not actually detecting the presence of a VPN block it was merely looking up the IP address and determining whether it came from an residential range or from a data centre.  Of course if it was a data centre it was likely to be a commercial proxy or VPN as most users would get their addresses from a residential range assigned by the ISP.  What needed doing was to assign a residential address to the connection when it was used with Netflix.

Which is what Identity Cloaker does, detects whether the connection is for Netflix, if it is then reroute through a US residential IP address.  It’s very clever and work brilliantly, however these addresses are much more expensive than standard data IP addresses assigned for non-domestic use so it will be interesting to see if the prices of these services start to rise.

Currently though if you want the best VPN for Netflix then Identity Cloaker is the service for you, the first to bypass the Netflix VPN block completely.   Although it should be stated that currently only the US VPN servers have this service assigned so it’s no use for accessing another version of Netflix currently.