When Netflix was first released it was only available in about a dozen countries. What was more annoying was that it was actually physically blocked outside those countries too. So for example if you were a US Netflix subscriber and you went on holiday to Mexico then your account simply wouldn’t work. This was incredibly frustrating for supposedly global internet service and for many people who traveled a lot meant their account was virtually worthless.

The fix used to be pretty simple, you could just find a proxy server somewhere online and then use it to hide your real location. So for all the people traveling or working abroad they could access their Netflix subscription by bouncing it through a proxy server based in the correct country. Fortunately that doesn’t quite happen now, Netflix is available across most of the world – 160 countries and counting now. So if you happen to be in a different location you should find that you can access Netflix without issue.

Yet there still is an issue, and it’s actually quite a big deal. You see although you can access Netflix in most countries across the world, the version you see is completely different. What’s worse the total libraries of these regional versions of Netflix varies hugely. 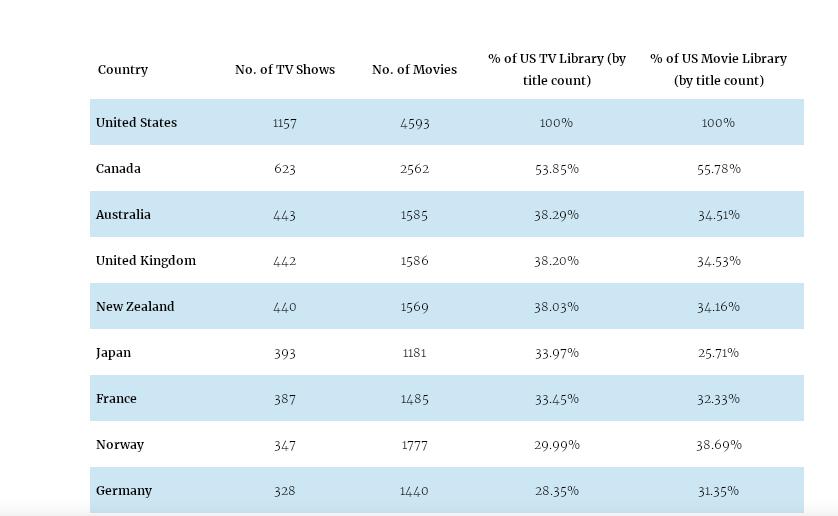 Just take a look at the above graphic and you can see the huge disparity between these versions of Netflix. What’s worse is when you’re half way through some sort of box set and then find the country you’re currently in doesn’t have it. Sounds like a trivial, first world problem and it probably is! However it’s incredibly annoying to have content you’ve subscribed for just being removed because you happen to be in a different physical location.

So do we have to revert to proxies now, to link back to our original version of Netflix? Well unfortunately that won’t work either anymore as they’re all blocked. Yes that’s true – every single proxy server is now completely blocked by Netflix – indeed it even means you can’t watch it in work as most companies use proxies to relay internet connections.

So – Netflix Proxy Not Working Anymore – What Can I do?

So they’re gone, proxies are now completely useless as a means of accessing Netflix. Forget free ones or even expensive premium proxy servers none of them will work. So what are the options for accessing your favorite version of Netflix?

Well the next option used to be VPN, as these are much more difficult to detect. They operate in a similar way to proxy servers but operate through a Virtual private network which is encrypted. Nobody can detect VPNs easily however unfortunately these no longer generally work with Netflix either. Although they can’t detect them automatically, what Netflix has done is to check the classification of the IP address.

Most VPN servers sit in large commercial datacentres across the world. This is fine and probably the best place for them to sit, however it also means that they are easily identifiable. This is because the IP addresses are registered to commercial enterprises as opposed to normal home users who have residential IP addresses. Early in 2017 Netflix made the decision to block access from all commercially registered IP addresses which suddenly meant that all the VPN services stopped working too!

As you can see these is something of an ongoing battle going on between Netflix and those of us who want to be able to watch the best films and movies.  It looked like Netflix won with their last IP block but it hasn’t been completely successful.  It is true that the vast majority of VPN services no longer work with Netflix despite what they often say on their websites.  However a small minority still do, in this video you can see one of those in action.

As you can see the security VPN – Identity Cloaker will allow access to the US version of Netflix from anywhere in the world.  They have done this by investing in  a range of residential IP addresses which are used when anyone tries to connect to Netflix.   These are only used for the media site as the addresses are difficult and expensive to obtain.  Most VPN services are unable to provide these IP addresses and so will get the normal Proxy/IP blocked message when you try to connect.

Please don’t expect to find any free VPN that works with Netflix anymore, these addresses are extremely difficult to obtain and expensive. It costs a great deal to enable a Netflix VPN so there will always be some subscription charge applied. Incidentally if you do find that Netflix says I’m using a proxy but I’m not then it’s likely you’re logging in through some sort of gateway with a commercial IP address.

Remember this only works with the US version of Netflix (although they are trialing access to UK Netflix too).  However generally the US version is the best one to use as it has by far the largest library of films and TV shows. There are some specialised companies who offer dedicated IP addresses which also allow access but they cost significantly more money that the Identity Cloaker subscription cost. Don’t worry that the company doesn’t advertise this facility, that’s a deliberate tactic to avoid attention!