How to Watch BBC iPlayer in Canada

Well, I’m in Canada, for the first time in my life – visiting a friend in wonderful Quebec.  So, I thought this would be a good time to put a quick post up on this site on how to access BBC iPlayer from Canada.   I’m going to use my laptop, but the method works for smartphones, tablets and Macs too.

I wanted to watch the final episode of a ghost story called Remember Me, which screened on BBC 1 on Sunday night.  This is what happened when I tried to access the show on iPlayer from Canada. 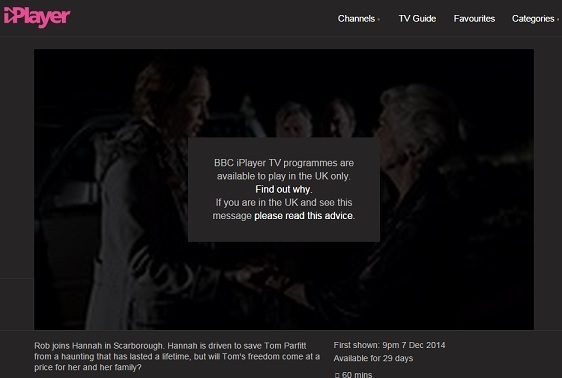 As you can see, the iPlayer application could see my IP address was a Canadian one and denied me access to watch.   It’s the same the world over, your physical location increasingly determines what you can access online, and it’s getting worse!  For example, the Canadian media sites are exactly the same, try and access http://www.ctv.ca/ from outside Canada and they won’t work either.  There are some wonderful media sites in the US and all of them are now region blocked too, including sites like Hulu, HBO and the awesome Pandora.   That dreaded ‘not available in your location’ message is becoming a fact of life for many people especially in the less connected countries.

So, here’s how you fix it – this method uses a program called Identity Cloaker, which I have been using for many years now.

As you can see, the program sits in your task bar and allows you to connect to any of their servers in about 20 different countries.   For the BBC and all the British TV channels you simply select a UK based server, if you want to watch US only sites, then choose one of the USA servers.   It’s that simple and all of the serves are extremely fast, super secure and accessible at all times.

It’s quite simple to use and the BBC iPlayer VPN workaround is actually used by millions across the world.  It’s very popular with expats too and the same solution will show you how to watch ITV Hub in Spain, Canada and other places outside the UK too.

During the opening of the 2018 World Cup over three million people watched England’s first match from outside the UK using the site.    Pretty surprising seeing as it is rumoured that BBC iPlayer detecting VPN system was put in place in early 2017.

There are lots of services which offer similar functionality, most of them cost about the same.  Identity Cloaker is the best one I’ve found for a variety of reasons –

It’s without doubt the most reliable proxy/vpn service available –

Update September 2022: During the last few years the BBC have introduced mandatory iPlayer login, so you’ll have to create an account.  This is not a problem simply connect to a UK server before creating an account and make sure you input a valid UK postcode.  The account is more for keeping track of viewing habits and histories than anything else.