BBC Frozen Planet 2: How Filmmakers Captured the Magic of the Arctic and Antarctica

It’s here! The eagerly awaited sequel to The Frozen Planet.  Over four years in the making, it looks like the sequel will be even better than the first, which was breath-taking.

What is the BBC Frozen Planet 2?

The BBC Frozen Planet 2 is a documentary film about the frozen worlds which exist on our planet. This new Six-part series is narrated by Sir David Attenborough. The programme follows on from the first Frozen Planet by visiting some of the world’s coldest places to see the wildlife which make these places their home.

The landscape is always cold, but the regions vary hugely in other aspects. From high mountains to very cold deserts and forests plus the coldest oceans on the planet. All these look hugely inhospitable yet many species have evolved to overcome the challenges presented in each environment.

Here’s the trailer for the new series which is due to be release at the beginning of September.

There are 6 episodes which will be released on a weekly basis from the 11th of September 2022.

It’s been more than a decade since the first series and therefore there’s lots of new technology been available for this series which has been in the making since 2018.

What are the different ways that the filmmakers captured the magic of the Arctic?

The filmmakers captured the magic of these frozen environments in a variety of ways. They filmed in natural settings, using aerial footage from high-speed drones to capture footage not normally available. The series is the creation of the BBC Natural History Unit who have taken four years to create this six-part-series.

They used a variety of camera equipment to capture the beauty of the Arctic scenery and visited 18 different countries. The technology in this area has also developed and this programme uses the latest technology to its full. 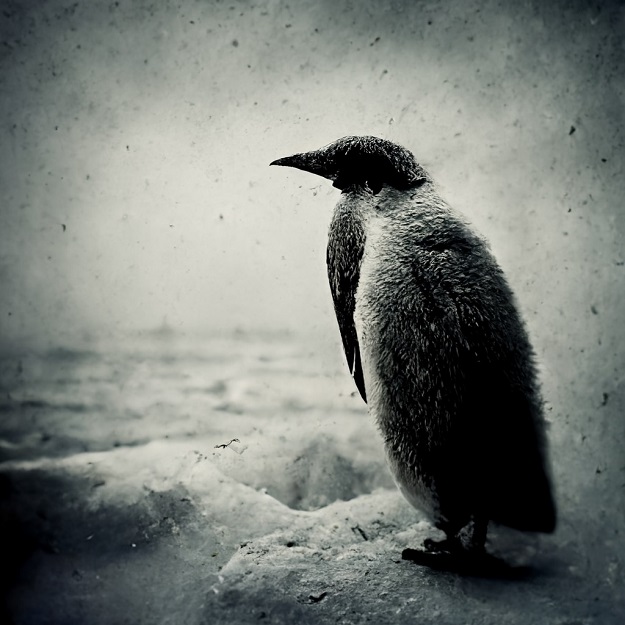 They also interviewed experts to get their insights on how climate change is affecting the region. Their goal was to create an informative and entertaining film that would help people understand what’s happening to the Arctic and Antarctica ecosystems.

Some of the scenes were far too dangerous for humans to get close too, which is why the drones were so essential. The series is the first use on screen of a new generation of light, super-fast camera drones. Perhaps the scene that illustrates this is of an avalanche shot in the Caucasus regions of Russia (Mount Shkhara).

The drones were also use extensively to document a huge ice calving in a remote area of Greenland. These events happen very quickly and are extremely difficult to prevent. To capture this footage a team watched in rotation 24/7 for over a month. They’d send the drones out across the massive Store Glacier simply watching. the resulting footage is incredible, watch as 100-foot-tall columns of ice break away from the glacier.

These shots were an important part of the goals of the documentary. Not just amazing footage and cinematography but a real insight to changes which are happening on our planet now. We’re surrounded with facts and statistics on climate change yet seeing scenes like these are infinitely more powerful.

What are some of the challenges that the filmmakers faced while filming?

Some of the challenges that the filmmakers faced while filming were weather conditions, equipment failures, and logistical issues. Indeed, some of these areas are so remote and difficult to get to even reaching them was a huge challenge. Obviously, the extreme cold is at the heart of these difficulties, yet this is also a dangerous environment too.

Most of the footage took a long time to capture and involved the camera crews spending a long time in these environments. The producer singled out the camera operator who spent weeks camping on in the Arctic during some extreme blizzards in order to capture the story of a musk ox.

Of course, much of this series was shot during a global pandemic so moving about was difficult too. Much of the crew spent significant times in quarantine while moving across different continents.

What are the different ways that viewers can watch the BBC Frozen Planet 2?

There will be a number of ways that viewers can watch the BBC Frozen Planet 2. However, the very first place it will be available is of course the BBC and its associated channels. The release date is Sunday 11th September on BBC 1. Remember though, you can still watch the amazing 1st series – Frozen Planet on BBC iPlayer too. 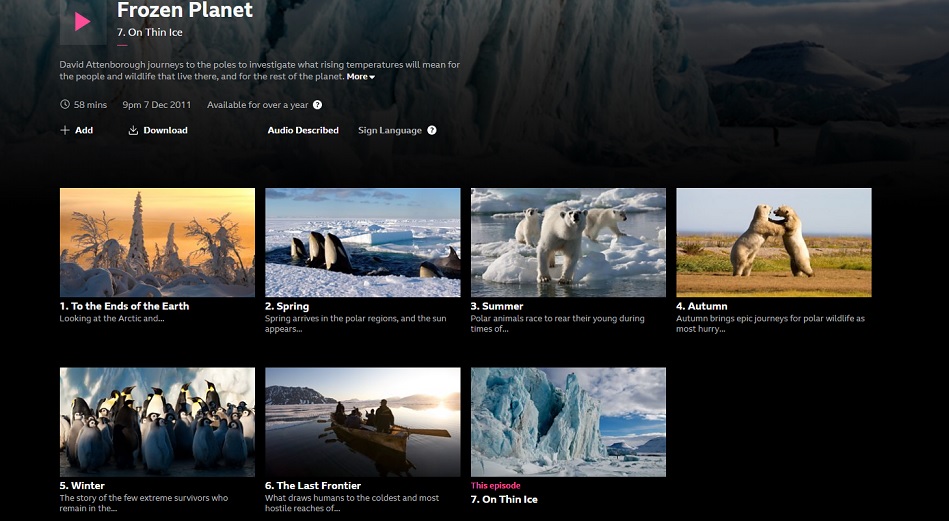 The show will eventually be streamed online, downloaded for offline viewing, or on Blu Ray and DVD.

The BBC and BBC iPlayer are available in the UK for anyone who has a valid UK TV license. Although technically you can actually watch without a license, there are large fines for those who are caught. If you’re in the United Kingdom, you should always make sure you’re covered by a British TV licence.

Watching Frozen Planet 2 Outside the UK

This can be difficult depending on your location, first of all the simplest method of watching on the BBC is not normally available. The BBC iPlayer is restricted outside the UK – enforced by something called geo-targeting.

Most of the main BBC shows are released in the USA via BBC America. So, if you have a cable or subscription package that includes this you should be able to watch Frozen Planet pretty soon after its initial release in the UK.

If you can’t get access via one of these local methods or simply can’t wait, then you can watch the BBC abroad by using something called a VPN. It’s not difficult and although not officially allowed millions of us have been doing this for many years to enjoy all the UK TV channels abroad.

How to Watch BBC Frozen Planet 2 Using a VPN

So what if you can’t find Frozen Planet 2 and don’t fancy waiting around for years until it appears on your TV network (if it ever does). Well, you could delve in the murky world of pirated digital downloads through programs like BitTorrent. Perhaps grab one of those modified Firesticks and stream through some IPTV servers.

Both have their risks both legally and more likely by harming your computer or device.

The other option is to actually watch it in all it’s true glory directly from the BBC on the BBC iPlayer. It’s easier than you think and right now literally millions of people all over the world are enjoying the BBC.

It can sound a little intimidating especially if you’re not overly found of technology. A VPN sounds like the sort of thing from a computer genius from a Sci-Fi crime thriller would use. You shouldn’t be worried though, as you read this, I can assure you thousands of elderly people who have virtually no technology experience at all will be using one to watch the News, Match of the Day ,Eastenders or Gardener’s World! Every expat in Spain watches the BBC like this!

The VPN software can be installed on a computer, laptop, phone or tablet very easily indeed. After that it takes little more than a click of a mouse or button to start using one. They’re widely used for computer and data security, perfectly legal and used across the planet by millions of people.

Watching the BBC From Anywhere

NordVPN is a very popular VPN program which is well worth checking out. You can use other VPN services too but check first that they support access to the BBC as many don’t. the process is very simple, select a UK server and any website you visit from that point will think you’re in the UK too. Which means you’ll have full access to BBC TV programmes and iPlayer irrespective of where you actually are. Don’t forget all the other channels will work too – use the same process for ITV and Channel 4 too.

If you decide to use a VPN to gain access to the BBC, then you’ll need to create an account. Some people get slightly worried about this but there’s nothing much to worry about and you only have to do it once.

Here’s what you need –

You don’t need a UK TV licence – even though you will be asked if you’ve got one! You have to say YES to continue but there’s no actual check of any kind. You can’t actually buy a UK Tv licence from outside the UK anyway.

Connect to a UK based server on your VPN service. Go to the BBC registration page – which is here https://bbc.co.uk/register. Then confirm you’re over 13 and enter your email address. You’ll be asked if you have a UK TV license which you must say yes to.

The only other information you’ll need is a UK postcode. This is used to configure your account to a specific location – e.g., BBC local news. Just input any valid code in the area you’d like your account to be localised too. It doesn’t matter too much where and you can change the region later if you prefer.

Just make sure the postcode (like a US ZIP code) is real. If you have problems, you can grab one from this page.

Remember you only do this once!

The BBC do actually try and block the use of VPN servers and to some extent have been quite successful. They do this from identifying VPNs when too many people connect at the same time. It’s why many VPNs no longer work with the BBC iPlayer.

There are a few VPNs that still work fine though and NordVPN is one of them. If you choose Nord to watch Frozen Planet on the BBC iPlayer, then make sure you use one of their BBC optimized servers which are below –

You should use the same servers for all UK TV abroad as they do work very well for streaming, although their other servers will work too.