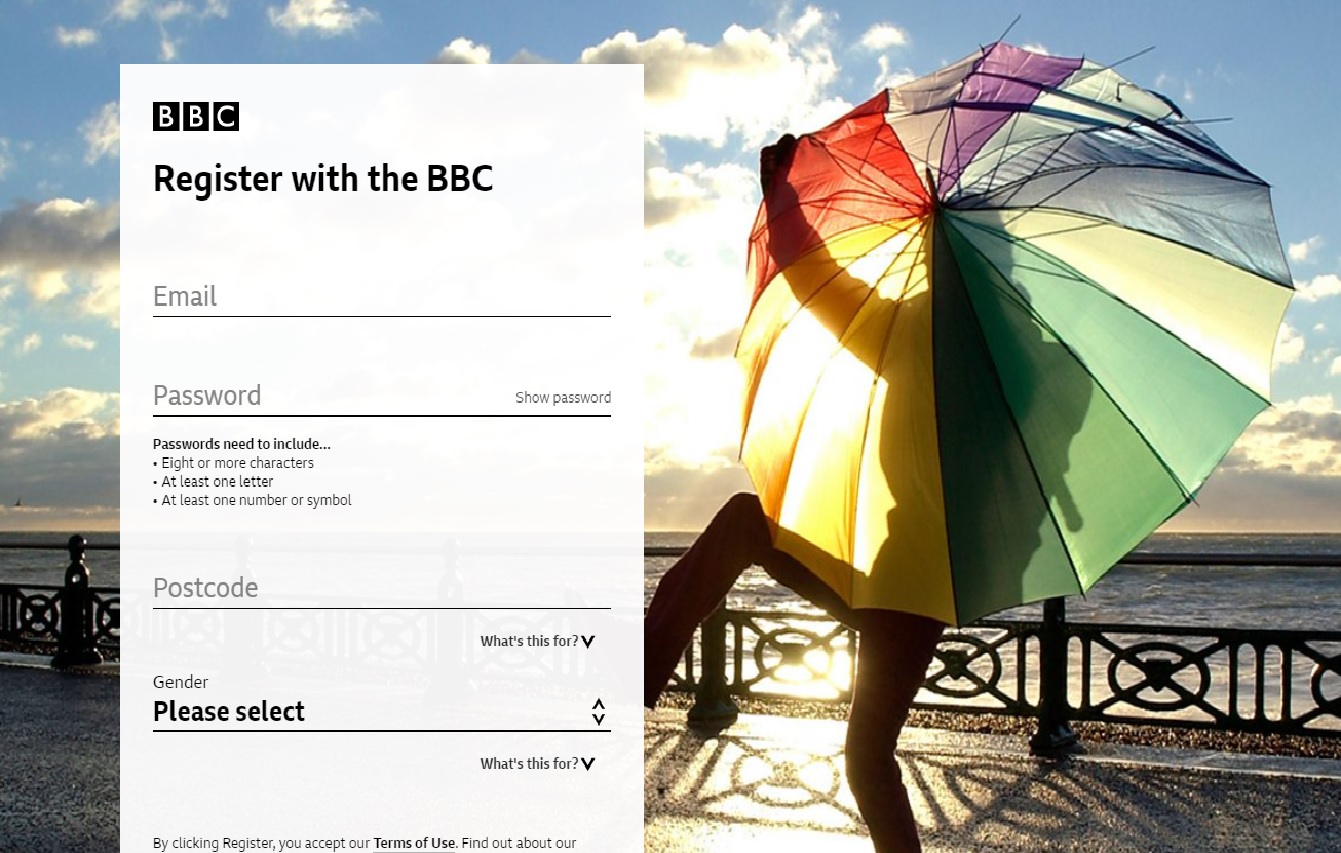 In this article we’ll explain everything you need to know to find a UK Postcode for use with BBC iPlayer.

What is BBC iPlayer?

The BBC’s iPlayer is a streaming service available on computers, mobiles, tablets and connected TVs. It allows viewers to watch live TV as well as on-demand programmes plus download BBC programmes too. It was launched in 2007 and is available in the UK only.

The service provides access to live stream any of the BBC’s 11 channels directly to your device. You can also watch most shows for up to twelve months after they have been broadcast from the archive section. there are a few exceptions to this especially time sensitive shows like BBC News which are not archived. also shows that require external licensing like Match of the Day are not archived for as long.

Some of the most popular TV shows you can watch on BBC iPlayer include: Top Gear, EastEnders, Doctor Who, His Dark Materials, Planet Earth, Killing Eve plus many, many more. BBC iPlayer has a wide range of streaming services, such as catch up, live TV and on demand. The website also offers radio programmes including the BBC Radio 4 podcasting

Does BBC iPlayer Work Outside the UK

‘If you look on the official website then you might get slightly misled. Officially it’s not possible to watch BBC iPlayer if you’re physically located outside the United Kingdom. There are no exceptions, for example you’ll get blocked in Ireland just across the border as you will on the other side of the world. Fortunately there is a workaround, a simple method to watch both the BBC and all the UK TV channels online irrespective of your location.

So actually the answer is yes, however there is something you’ll need to make sure that your device can play BBC live streams from non-UK locations like Spain, USA and other countries. If you don’t then the service might not work for you.

How to watch BBC iPlayer with a VPN?

BBC iPlayer lets you stream live content from BBC One, BBC Two, etc but normally only if you’re physically located in the UK. It checks by looking up the location of your IP address when you connect to the site. Anything registered outside the UK and you’ll get redirected to the ‘International version’ of the BBC i.e. the one without any TV or radio programmes on it.

There is a way to fool it though and indeed millions of people do just this. It involves using something called a VPN (Virtual Private Network) to hide your real IP address and instead present a UK based one instead.

Here’s a quick demonstration of how it works.

Watch this video to see one that is working in 2021, it’s called NordVPN !

Pretty simple stuff I think you’ll agree? However before you start you’ll also have to create an account. In 2020 the BBC made it compulsory to create an account before being able to watch anything in BBC iPlayer. It’s not difficult though and doesn’t cost anything, you can be streaming UK TV everywhere in a few minutes. However there are a few things you need to make it work.

The BBC is the world’s leading public service broadcaster. It provides high-quality, impartial news and information in English and Welsh. The BBC iPlayer service lets you watch programmes on demand, as well as listen to live radio and catch up on news.

To sign up, you need a BBC account, which is free of charge. You can set one up here or by downloading the BBC iPlayer app on your device.

2. Next you have to select the type of account – 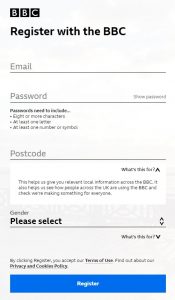 You need to provide your email address, postcode and a password.

We ask for your email address, password and date of birth.

We ask you for a username (instead of an email address), password and date of birth.

Basically to get access to the full functionality of BBC iPlayer you need the over 18 account. So you’re going to need an email address, postcode and a password for your account. All of these are pretty straight forward, pretty much any email address will do and a basic password of 8 characters will suffice.

Which leaves only the postcode which is where people from outside the UK often get stuck.

Where can I get a postcode for BBC iPlayer?

Obviously if you are in the United Kingdom then you can just use your real postcode. Yet what do you do if you’re using a VPN access the BBC from outside the United Kingdom. Well it doesn’t really matter, there is only one check and that’s to ensure it’s a valid postcode (like a US ZIP Code) that actually exists.

You can use your old postcode if you used to live in the UK, pick one from a well known location or just grab one at random.

As long as the Postcode is real and exists there is no issue at all.

The BBC certainly doesn’t check the location or whether your name is linked to it. In truth this would be very difficult to do and there’s no plans to support any sort of authentication feature.

One thing you should remember though the postcode you use will be used to customise your access to the BBC iPlayer. So you’ll find local news and radio stations will match the postcode you’ve inputted. You can change the regional settings when you’ve logged in though so this isn’t a big problem.

Where can I find a fake postcode for BBC iPlayer?

Simply type in a location in Google and you’ll find something. For people struggling finding inspiration and just want something random – here’s a few suggestions for codes that facilitate BBC iPlayer International access.

As mentioned it doesn’t really matter which postcode you use as long as it’s a valid one.

So if you’re armed with a UK based VPN and any valid UK postcode then you’re ready to go. You might worry is BBC iPlayer free ? Relax it is, as long as you follow the instructions below regarding the license.  Millions of us are watching iPlayer abroad without restrictions and have been for years.

There is one more point to be aware of – you’ll be asked if you have a UK TV license before you can watch anything. It usually pops up before you start streaming something new or when first accessing the site. 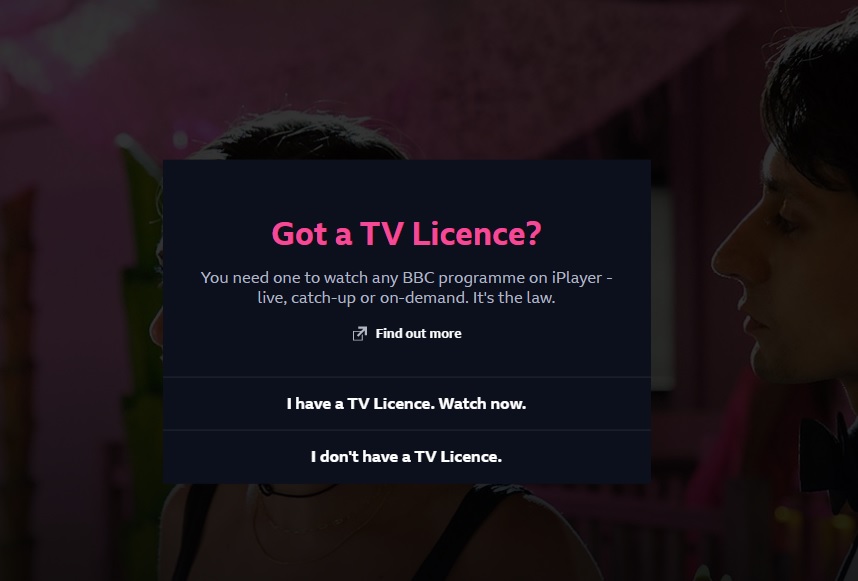 Again this is nothing really to worry about for anyone trying to access from outside the UK. If you answer – “Yes, I have a TV license. Watch now” that will be the end of it. There’s no further check or validation of your answer so as long as you confirm you’ll be fine. If you say no then I’m afraid you won’t be able to access the site, at least all the sections which contain live TV and the BBC iPlayer archive too.

How much data does BBC iPlayer consume?

Much of this depends on which resolution you decide to stream in. Higher resolution uses significantly more data than standard definition. As a rough estimate high definition (HD) quality stream will require about 1GB data for each hour watched. If you watch in standard definition (SD) then this should fall to around 240mb data an hour. Both are significant amounts if you use your phone’s data allowance so it’s probably best to watch over an internet connection.

Why don’t all VPNs work with BBC iPlayer?

The BBC and other media sites don’t want you to watch from abroad at all. They take steps to block access from VPN and proxies and sometimes they succeed. This normally involves monitoring connections and blacklisting IP address ranges which have too many users connecting at the same time.

This is why busy and free VPNs no longer work with BBC iPlayer.    Most of these VPNs have been blocked by the BBC in 2021. Plenty still do work though if you pick the right one.

Which Server to pick?

You must select a UK server as the BBC will need to say a British IP address.

How can I watch ITV Hub abroad?

In the exact same way, use a postcode from above and make sure you’ve got a UK VPN connected first like the BBC,

What is the best vpn for the BBC ?

In our opinion, NordVPN is one of the best VPN services to watch the BBC from abroad. They maintain a huge UK network and optimise many of their servers for BBC access.